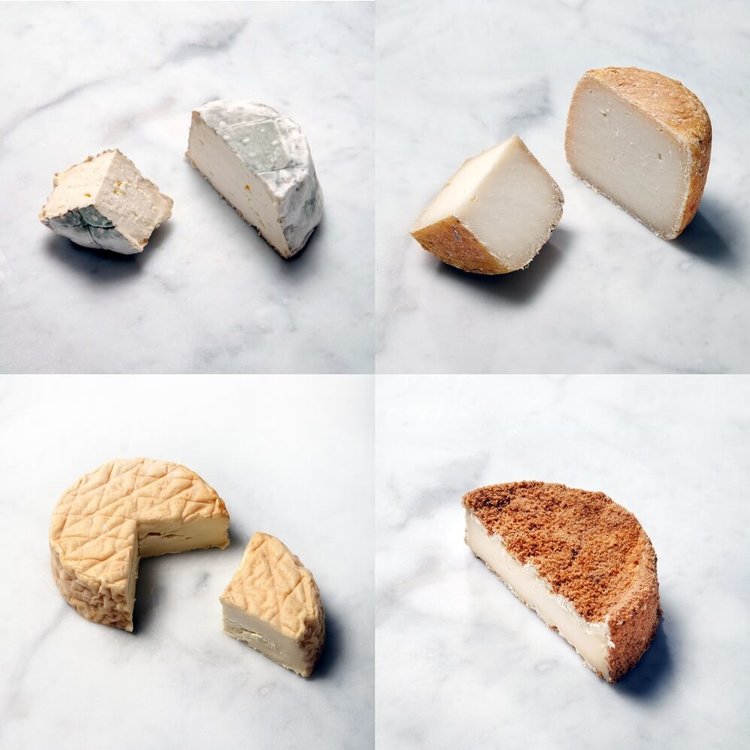 Made and sold by: Harvey & Brockless

Courier: Order by 10am on 17 December

Jules Artisan Food has selected some of the best washed rind cheeses with wine, cider or Brandy.
Some washed rind cheeses are soft and oozy; others are solid enough to grate. The creamier examples are also called "monastic" cheeses, with recipe origins in the Franciscan monastaries of France and Belgium. Traditionally, meat-abstaining monks relied on cheese as a source of protein, and the profits they made from selling cheese became critical for running their monasteries. Many monks in the Medieval age were brewers and distillers as well, so some began lacing their cheese brines with booze for added flavour, complexity and preservation power.

This selection is not for the faint hearted but you will get 4 distinctive cheeses with stronger to milder flavours and soft to harder texture.

Drunken Burt Cider Washed Cheese 180g
Drunken Burt is washed in cider. It has a semi-soft texture with a golden colour and a smokey pungent flavour.

Hand-made using pasteurised cow's milk from local dairies in Cheshire, Drunken Burt, is a Burt's cheese with a difference; instead of piercing the cheese during ripening, which encourages blue veins to develop, the cheese is washed in cider. The 'paste' of cheese takes on some of the golden colour of the cider and also some of the flavour characteristics, sometimes you almost pick up the smoky note from the oak barrels. You can expect the younger cheese to have a slightly 'chalky' centre, which softens as it continues to mature.

Gaugry's Epoisses Cheese 250g (Washed Rind)
Epoisses is the cheese that made Gaugry cheese makers famous. Washed with Marc de Bourgone, it has a floral aroma, with a shiny and slightly wrinkled rind. Once aged it can be quite pungent with a smooth creamy texture.

The Epoisses Gaugry has a slightly wrinkly appearance and the colour varies from ivory with orange hints to brick red and will depend principally on the maturing, with the use of any colourants being strictly forbidden. The cheese itself is pale beige in colour, with a smooth and creamy texture.

Katherine Goats' Cheese 250g (Washed Rind with Somerset Cider Brandy) By White Lake
A semi-hard washed rind goat cheese. Washed in Somerset Cider Brandy this cheese has a slightly softer texture and a stronger and more complex flavour than its cousin Rachel. A pretty addition to any cheese board.

Katherine is a semi-hard unpasteurised goat's milk cheese that is washed with Somerset Cider Brandy and is made with raw milk and animal rennet.

Camembert Washed Rind Calvados Cheese 250g
Camembert Calvados has been created using two of the best products Normandy has to offer: camembert washed in Calvados! The paste is a plump golden-yellow with a creamy- white rind and has a fragrant aroma and full-flavour. These creamy flavours are accentuated with the strong apple calvados taste.

Camembert au Calvados is a wonderful combination of two of Normandy's largest exports - Camembert and Calvados. This camembert is ''DOP Normandy'' labelled, ensuring a premium quality.