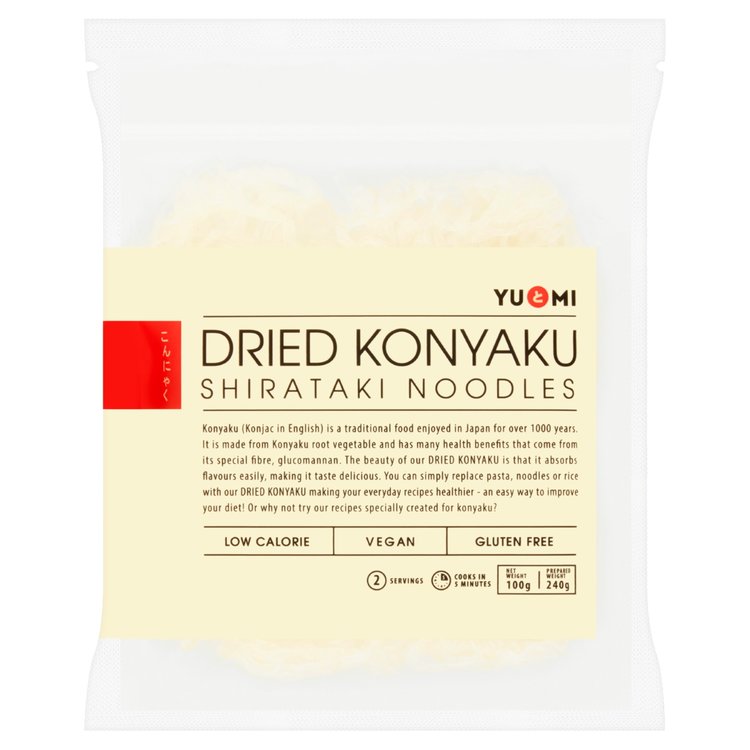 Made by: Tretes co ltd

Konyaku (also known as Konjac or Konnyaku) is a traditional Japanese food and can be used as a healthy alternative to pasta or noodles. Our special 'Dried' Konyaku absorbs those flavours from the food cooked with it making it taste delicious! It has no unpleasant smell when you open the packet, as it is completely odourless.

Nutritional value when prepared (per 100g)
Energy 27kcal / 110kj (*)
Fat 0g
Carbohydrate 0.54g (*)
of which Sugars 0g (*)
of which Fibre 12.5g
Salt 0.03g
* Energy, Carbohydrate and Sugars are significantly reduced as prepared because the tapioca syrup, which is used to coat the Konyaku is washed out after cooking and rinsing the Konyaku.

Prep & Usage
Place the Dried Konyaku in a bowl, pour boiling water over it, and leave for 5 minutes (no need to boil on the stove). Rinse and drain well, and it is then ready to add to any dish, even in place of noodles, or instead of pasta. Alternatively, simply place Dried Konyaku into any soup dish and it will absorb the liquid and flavours.

The main ingredient of Dried Konyaku is 'Mukago Konyaku' which is naturally grown in Tretes, a mountainous area in the Java province of east Indonesia.

The Dried Konyaku product was first produced by Seijji Ishii, a Japanese soldier who had to remain in Indonesia after World War II. His dream was to help develop a good relationship between Japan and Indonesia, and he created a product which allowed this to be possible. His friend Tetsuhide also helped make his dream come true by setting up the exportation of Dried Konyaku to Japan.

Today, Seiji's original Dried Konyaku farming business in Indonesia, Ambiko, is managed by his grandson, Johan. It provides jobs for many members of the community, including lots of women who work in his farm and factories. The Dried Konyaku food distributor in Japan, Tretes, is now managed by Tetsuhide's grandson, Kei Nakagawa. Products are packaged by people who work in welfare work place for the disabled and it helps them to participate in social community.

Store in a cool, dry place