Grub’s up! Why aren't we eating more insects? 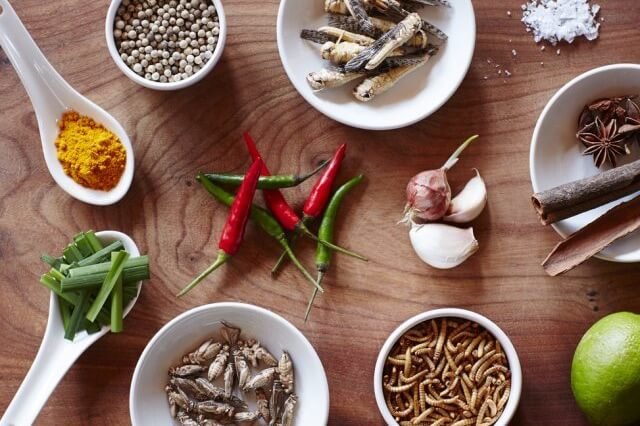 There’s been a lot written about edible bugs lately. Entomophagy is one of those hot trends that is perhaps more talked about than swallowed. Before they tuck in to chocolate-covered mealworm flapjacks, intrepid consumers tend to ask at least one of the following five questions:

Why don’t we eat grubs and insects?

It’s a cultural thing. From infancy we are told that eating insects is both “dirty” and “wrong”. And, to be honest, nobody likes to swallow a fly. In the UK — a land of plenty — a lot of people already classify the likes of muesli as bird food, but then birds are very selective about meeting their nutritional needs.

But we eat eels, oysters and their ilk … We eat all sorts of weird and wonderful things, from unclean pigs to foul-feeding lobsters. Not to mention squirrels. So do clean-eating grubs and critters really seem that strange? They are a key dietary ingredient for large swathes of Asia and South America and mostly live upon vegetables — caterpillars, for example, much to the wrath of many gardeners, feed on the goodness of raw cabbage.

Where are the edible bugs you can buy online sourced?

Imported from bug hunters and bug farms where they are reared specifically for human consumption and lab tested to comply with UK import regulations. “Our worms and crickets are fed a combination of cereals and carrots, and our grasshoppers are fed grass and bran, making our insects tasty and nutritious,” says Shami Radia, co-founder of Grub. “They are harvested through a freezing process which effectively puts them to sleep, then freeze dried, ready for cooking with.”

Are there any health or environmental benefits to eating insects?

In terms of production, insects have a much lower carbon foot print than intensive livestock farming. And weight for weight they are lower in fat and higher in protein than meat.

Obviously this depends on taste and who you ask. People say that grasshoppers have a nutty taste, while crickets have been likened to pork scratchings and dried shrimps when fried.

What treats can we make with them?

As a general rule of thumb, insects can be marinated and roasted wrapped in tinfoil but, like nuts, they are delicate and shouldn’t be overcooked. The team at Grub suggests: chocolate cherry cricket brownies, spicy grasshopper stir fry, buffalo worm fried rice and mealworm flapjacks. Grub's up!

These truffles look just as good as they taste, and you'll be amazed that they're free from dairy and refined sugar!