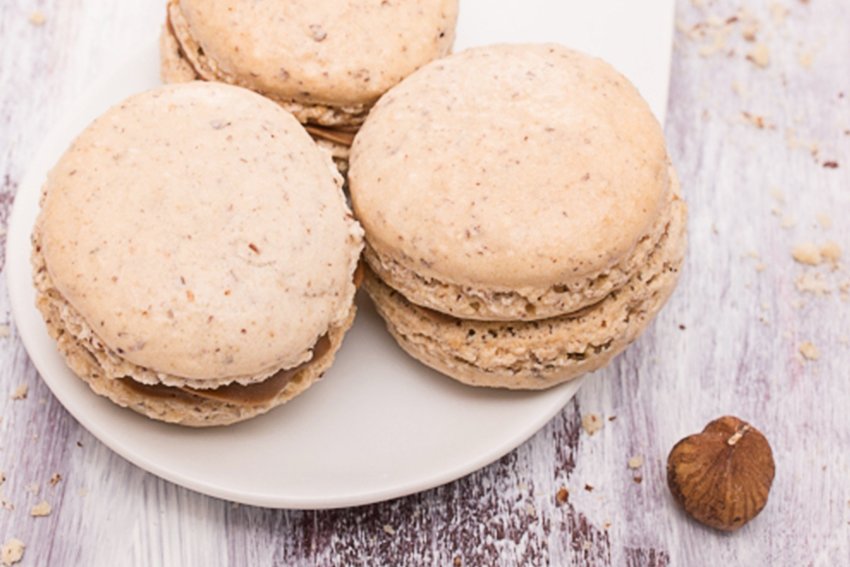 by The Nut Kitchen

The French Macaron is such a beautiful little confection, crispy on the outside, fluffy and slightly chewy in the middle. Using The Nut Kitchen's smooth, rich hazelnut paste as a filling makes this a delectably dairy free treat.

2 Using a stand mixer, pour the egg whites in the bowl and beat until soft peaks form. Add the caster sugar and a pinch of cream of tartar, then whip on medium-high speed until stiff peaks form (about 8-12 minutes).

3 While the egg whites are whipping, mix the ground almonds and icing sugar using a food processor. Process for about 15 to 30 seconds or until the almonds do not pass through a sifter or mesh strainer.

5 Fill a pastry bag fitted with 10mm round tip with the batter. Pipe circles of batter onto the prepared baking sheet. Hold the piping bag vertically (90 degrees) just above the surface of the pan, squeeze the batter out until it reaches the edges of the circle, stop pressure and gently pull the piping bag off to the side to eliminate any peaks. You should get about 30-32 circles depending on how big you pipe them.

6 Once all your circles have been piped, tap the bottom of each sheet, either with your hand or against the counter, to eliminate air bubbles and settle any peaks. You can also top each macaron with some leftover nut mixture.

7 Allow the macarons to rest for 30 minutes. Preheat the oven to 140C for fan ovens or 160C for conventional ovens.

8 Bake the macarons for 10-15 minutes or until they have a nice frilly edge. Allow to cool on the pan for 10 minutes before gently removing onto a cooling rack.

9 Once the macarons have cooled completely spread the flat part of one with a generous amount of The Nut Kitchen Hazelnut Paste, then top with another. Enjoy!

Carmelo di Bartolo and George Smith met at an international food show in Paris in 2012. Both are seasoned professionals in the nut industry, but more importantly both have a curious passion for all things nuts that go beyond the call of duty. During the summer of 2013 they experimented with a special pistachio paste recipe for commercial chefs and bakers. This was launched in February 2014 and they soon realised they had created a unique product. In April 2016, The Nut Kitchen was born — a unique and exciting range of nut pastes and creams, crafted by Sicilian artisans for discerning foodies and creative home chefs.

The Real Magic of Mushrooms...

How superfoods such as reishi mushrooms and maca can boost your overall health and well-being.

Can you believe these fluffy pancakes are completely free from eggs and flour?

These truffles look just as good as they taste, and you'll be amazed that they're free from dairy and refined sugar!