We are Marta and Andy, and we are beekeepers form Edinburgh. We specialise in rare, high quality, raw honey, which we source from our own apiaries both in Scotland and Poland.

Our beekeeping tradition reaches back to 1957 when our grandfather, Witold, started his first apiary in Poland after his initial training in Scotland during WWII. We are a third generation of beekeepers in our family and proudly cultivate our heritage in Scotland. Our mission is to provide high quality honey at a reasonable price with a small environmental impact as possible. That is why in our branding, packaging and shipping, we use only recycled materials. We have in our range 10 different single origin types of honey, honeycomb and bee pollen and offer 8 different seasonal honey infusions during.

This story is ridiculous, seriously - almost unbelievable. It involves a war, a plucky boy, several battles, many many bees, two people falling in love, it even involves a bear. But, like the best stories, it ends sweetly, it ends with honey.

Stan was shipped off to the Western Front where he quickly defected, travelling through Europe to join the Polish 2nd core and the Allied Forces in Egypt. Here’s where the bear comes in. The Polish 2nd core had adopted a bear in Iran. A bear that, by the time Stan appeared in Egypt, had developed quite a fondness for smoking, drinking, and wrestling. When the time came to leave for the Italian invasion the bear (by now named Wojtek) was an indispensable part of the team. So, when the British refused to let Wojtek on the ship (health and safety), there was only one thing to do. Wojtek was enlisted as a soldier. By the end of the war his tendency to carry munitions across the battlefield saw him rise to the rank of corporal.

The war ended and Wojtek and the Polish second core found themselves disbanded in Edinburgh. Stan was stationed at a farm in East Lothian for a while and far away from home and from Wojtek, he began keeping bees to pass the time. Wojtek was taken in by Edinburgh zoo and slowly the Polish soldiers returned home. But the world had changed and the returning heroes were treated with suspicion by the Soviet forces.

Stan, unable to find a job, took up beekeeping again, finding amongst the bees the same companionship he had with Wojtek and the 2nd core. Andrew grew up on his grandfather’s farm, learning to keep the bees and listening to his grandfather’s stories of a war he had not seen and a bear in a faraway city.

But the stories weren’t enough to keep him forever. Andrew left the farm with dreams of becoming a chef. He ran first to Edinburgh on his grandfather’s advice. Then back to Poland for a while and then to Guernsey where he met Marta, the love of his life and, eventually, the brains behind the Edinburgh Honey Company.

Let’s not get ahead of ourselves though. Andrew might have left the farm and his grandfather’s stories but the magic of the bees kept calling. So, when him and Marta found themselves back in Edinburgh, Andrew began to work on a different dream. Building on all 60 years of his family’s beekeeping experience, Andrew set up hives in the Scottish countryside. And the honey started flowing again. They now have a bee farm in Perthshire and plans of expanding, hoping as they do to remain good stewards to the environment they live and work in.

And so we find that the end of this story is the beginning of another one. Certainly, for Marta and Andrew the adventure has just begun. 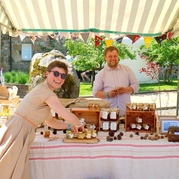 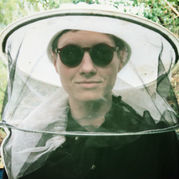 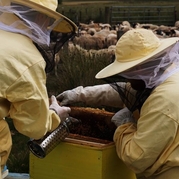 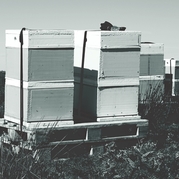